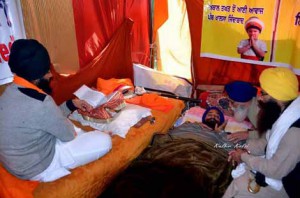 Listening to Indian mainstream media and society, you might have missed this phenomenal course of events stirring up global dialogue from Punjab over the past 41 days. With Anna’s bill getting tweets, ironically enough, from globally infamous human rights violators like Modi, and India busy defending its diplomat’s oppressive labor practice as a source of national pride. It is sad that Gurbaksh Singh’s is a name yet largely unheard of in the Indian mainstream.

Since November 14, one man, a Sikh farmer, has been using his body as a means of protest to highlight human rights violations against prisoners, protesters and advocates of human rights. He is literally killing himself to bring attention to the cause.

While Sikh internet media sources have played a key role in espousing his struggle onto a global platform, Indian mainstream media is largely mum on the issue. BBC Radio rightfully noted:

“[M]ost people in Delhi, most people in other cities in India would have very little idea that there is a man in Punjab who has been on hunger strike since the middle of November…because of political prisoners being held beyond their terms of sentences.” 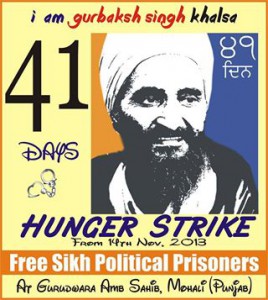 Coverage or not, Singh is steadfastly committed to the cause and is demanding the release of six prisoners who are among many other political prisoners identified by human rights activists in Punjab as being held without due review (the oldest of the list of 118 prisoners, being 94-years-old). These men were swept up during the state oppression and genocidal violence after 1984; the landmark year when the Sikh Golden Temple (Harmandhir Sahib, Amritsar) was stormed by the Indian Army on a day of religious celebration, directed by Indira Gandhi. With thousands massacred by gunfire, tanks, beatings and burnings, hundreds became actively involved against the Indian state and fighting against its injustices. Over the next decade Punjab experienced mass human rights violations and the disappearances of thousands of Sikh men and women, most of whom are believed to have been killed in fake encounters and others locked up for almost three decades now.

Gurbaksh Singh has experienced, first hand, the oppression of the state: as a survivor of the post 1984 violence and now as a non-violent protester still being met with police brutality. On the 23rd day of his protest, Singh was illegally detained overnight, beaten, forcibly administered glucose and subjected to non-consensual medical exams; however his resolve remains unfazed. Singh summarizes this in his own words saying, “Jabbar da mukablaa, sabar naal kar rahe haan.” He is responding to force with patience, but he doesn’t hesitate to ask- if peaceful patient protest will also be thwarted, what are people to do? https://www.youtube.com/watch?v=UZJmrSkHwOg

Community groups and human rights defenders are expressing fear for Gurbaksh Singh’s safety, especially given India’s precedence of selectively dealing with political activists with great coercion and violence based on the state or minority group to which the activist belongs . We only have to think of the treatment meted to Irom Sharmila of Manipur, being held on charges of attempted suicide for her twelve year hunger strike against the Armed Forces Special Powers Act in her state; recently being highlighted by Amnesty International which is again demanding charges to be dropped immediately. ((link))

Given the exigency of the situation, global media including CNN has created space for coverage, dialogue and updates on the most current of events . Canada’s official opposition party, the NDP, has released a statement of concern and urgency after meeting with India’s High Commissioner ; and USA based Sikh organizations have collectively released a statement. During 1984 there was an enforced media blackout not allowing for news to leave Punjab. I wonder, what is stopping the press today? With State oppression an already difficult feat, what happens when the people’s press only works to reinforce the injustices of the day?

What will it take for Gurbaksh Singh to be heard?
Countercurrents.org से साभार