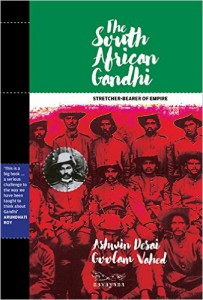 The South African Gandhi: Stretcher-Bearer of Empire, the book I co-authored with Goolam Vahed, has elicited widespread comment, mostly by people who have not yet read it. Rajmohan Gandhi, the grandson and biographer of Mohandas Gandhi, writing in The Indian Express (‘Why attacks on Mahatma Gandhi are good’, September 9), says the book contends that “Gandhi disdained black people and supported British imperialism” during his South Africa years. Rajmohan does not deny the allegations, but his main contention is that these issues are not new — which reveals much of his own way of viewing the liberation struggle in South Africa.

Rajmohan is keen to argue that once Gandhi realised that empire was bad (in the 1920s), he became its foe. But what does it say about Gandhi that during his time in South Africa, he saw empire as a benign, if not progressive, force? In Gandhi’s time in South Africa, the British empire was at its acme. The Zulu kingdom had been decimated through plunder and pillage, while taxes forced African men off the land and into gold and diamond mines. Their wives and children were not allowed to accompany them. It was a brutal system.

What did Gandhi have to say about empire at work? One “where all races would be equal”, as Rajmohan says he believed? He could only envision this because he wrote Africans out of history. When he did write about them, it was of the ways in which empire could further exploit and subjugate them. So it is not just a question of Gandhi’s racism and belief in empire, but his view that Indians should be allowed to join whites in this system of racist super-exploitation. As for nursing the sick, his other passion besides empire, Gandhi did not care for those dying in British concentration camps. His ambulance missions were limited to showing loyalty to empire.

Did the empire’s batons have to land on Indian backs before Gandhi realised its falsity in the 1920s? If so, this aggravates the charge that it took assaults upon those occupying the “Aryan” plane of civilisation to jolt him out of this most obvious error. It is like saying that Gandhi did not care about slavery (except for wanting Indians to be allowed their own slaves) because it was limited to Africans, but when Indians were turned into slaves he saw the fault and fought against it. Gandhi took up empire’s cudgels to ensure that Africans were kept in their place. For us, this is what marked Gandhi — his begging to be the stretcher-bearer of empire in South Africa. And when tired of stretcher-bearing, he asked for guns to defend empire against the rebellious natives. Rajmohan goes on to argue that “the younger Gandhi [was] at times ignorant and prejudiced about South Africa’s blacks… especially when provoked by the conduct of black convicts who were among his fellow inmates in South Africa’s prisons”.

“Provoked”? Were their black bodies a provocation, the same provocation that in a brutal racist system landed them in prison? Rajmohan then argues, “the struggle for Indian rights in South Africa paved the way for the struggle for black rights”. In one sentence he writes out the history of African resistance to colonialism that unfolded much before Gandhi arrived on the scene and which he was quite keen to subvert by siding with white colonial power. Rajmohan holds that “on racial equality, … [Gandhi] was greatly in advance of most if not all of his compatriots”. This is a staggering claim. The South African Gandhi accepted white racist minority rule, and openly proposed that Indians and whites were more civilised than Africans, that they were lazy, and that they needed to have more taxes heaped upon them. Of his prison experience, he wrote: “We could understand not being classed with the whites, but to be placed on the same level with the natives seemed too much to put up with.”

Cherry-picking a quote here or there does not nullify this but does say much about Rajmohan’s own blinkers, which allow him to write so glibly about Gandhi’s siding with empire in the subjugation of Africans.

Rajmohan ends on this resounding note: “Some, however, seem to think that they are wiser than (Martin Luther) King or Mandela.” Mandela said many things. He aligned his name with arch-imperialist Cecil John Rhodes. And many have long gotten over the idea that Mandela’s words are gospel. In any case, given his South African prison record, would Gandhi have shared a cell with Mandela or King?

Rajmohan sets out to exculpate Gandhi but ends up revealing much about his own narrow, even racist, lens by arrogating for Indians a vanguard role and rushing over Gandhi’s complicity in the empire’s brutal project at the turn of the 20th century. Once we are clear and honest about this, we can turn our gaze to the false promises of empire and the provocations of Africans.