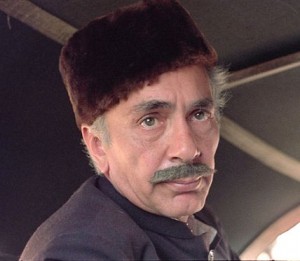 On May 1ST 2013 we celebrate the centenary of the legendary Indian actor Balraj Sahni.He was born in Rawalpindi,in Punjab on May 1st 1913.It is so appropriate that he was born on the historic occasion of May Day as he himself devoted his life to the liberation of the working class.
What was unique about Balraj Sahni was the style in which he portrayed the oppressed masses of India.He was a thorn in the flesh to the ruling class culture.From his youth days he was influenced by Marxism and joined the Communist Party of India.Balraj was one of the founding members of the I.P.T.A.and was arrested in 1951 for supporting the Telengana Struggle.Balraj was the founding member of the All India youth federation-the youth wing of te Communist Party of India.
In 1947 Balraj gave his first portrayal in Dharti ke Lal. Dharti Ke Lal was critically acclaimed for its scathing view of notorious Bengal famine of 1943 in which over 1.5 million people died. It is considered an important political film as it gives a realistic portrayal of the changing social and economic climate during the World War II.The film uses the plight of a single family caught in this famine, and tells the story of human devastation, and the loss of humanity during the struggle to survive.During the Bengal famine of 1943, members of IPTA travelled all over India, performing plays and collecting funds for the survivors of the famine, which has destroyed a whole generation of farmer families in Bengal.[2] Thus Abbas was deeply influenced by the work of IPTA, and hence based his script upon two of IPTA plays, Nabanna (Harvest) and Jabanbandi by Bijon Bhattacharya, and the story Annadata by Krishan Chander. Even the cast of the film was mainly actors from IPTA.
Hower it was in 1952 that he gave the best performance of his illustrious career in ‘Do Bhiga Zameen’.This film portrayed the poverty and landlordism prevalent in post-independence more than any film and it’s theme is arguably more relevant in the modern era of globlisation.Balraj brilliantly enacted the role of Shambu Mahato who becomes a rickshaw puller in Calcutta in order to pay his debts to the money lender and save his land .In the end a factory is put up on his plot.No face in Bolywood could express the sorrow of the peasant as Balraj Sahni acting as Shambu Mahato did when his land is lost.Sahni’s face literally wrote the hearts of millions of oppressed peasants of India not only then ,but even now.To get into the skin of the character Balraj pulled rickshaws and lived with the rickshaw pullers.Viewers could hardly feel Balraj was even acting as he was as natural as water flowing in a stream.He brilliantly exhibits feelings of hope and frustration as well as insecurity and confusion.It was one of the finest acting displays representing the opression of a common man in world cinema.Today in villages in India ,there are shortages of drinking water, suicides of peasants who are unable to pay their debts to commission agents,and forceful seizures of land by SEZ’s.Today in Balraj Sahni’s very homeland of Punjab there is still an abject monopoly of moneylenders.
The story revolves around a farmer Shambu Mahato (Balraj Sahni), who lives with his wife Parvati `Paro’ (Nirupa Roy) and son Kanhaiya (Rattan Kumar) in a small village that has been hit badly by a famine. After years of drought, the region finally gets rain, leading to the farmers to rejoice. Shambu owns two bighas (a unit of land measurement where 3 bighas is 1 acre) of land, which is the only means of livelihood for the whole family. The local zamindar (landlord) Thakur Harnam Singh (Murad) partners with some city business men to construct a mill on his large parcel of land, which in return would profit them and bring prosperity to the village. The only problem is that in the middle of Harnam singh’s land lay Shambu’s meager two bighas of land. 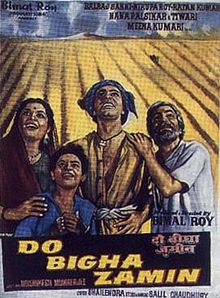 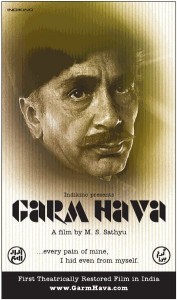 In ‘Garam Hawa’,(1972)his acting championed the cause of secularism ,when his acting portrayed the character of Salim Mirza ,who refuses to yield to communal forces and migrate to Pakistan. Displaying no exaggeration in his acting and a natural style Balraj won the hearts of the Indian masses a little after communal riots had taken place in Mumbai.This film is of immense relevance today when the world opinion is pitted against the Muslim community . Quoting Anuradha Warrier ‘Probably Balraj Sahni’s most definitive performance, and that is saying a lot, considering his immense talent. A landmark movie, based on the Partition, MS Sathyu directs Ismat Chugtai’s poignant story (Kaifi Azmi’s script) that takes a searching look both at the social repercussions of tearing apart a nation, and at the impact of such an occurrence on the lives of one individual family.”
Balraj Sahni is Salim Mirza, a Muslim businessman who chooses to stay back in India even as his siblings and even his older son decided to leave for Pakistan. It is a decision that will have grave consequences. Being a minority in a fledgling that suddenly looked upon their own people with suspicion, Mirza’s younger son (Farooque Shaikh) is told, often to his face, that he should go ‘to his own country’. As the individual strands play out their own denouements, Balraj Sahni’s Mirza is the face of every Indian muslim of the time who made that same choice.
Where Sahni drifted was that inspite of being morally so drawn to the left he showed great sympathies toward Nehru and Gandhi and stood by the C.P.I,during the great Debate,failing to demarcate from the revisionism of the then U.S.S.R..He also acted in ‘Haqeekat’ a film about the Indo-China in the 1962 war which virtually treated China as the villains or culprits and glorified India’s cause.He failed to unite with the leftist forces who opposed the Sino-Indian war,taking no concrete stand opposing India’s role in the war.Sahni never fully recognized the reactionary character of Indian ‘Independence’ and of Gandhi and Nehru.
Neverthless his good outweighed his negative points by far.Today revolutionary cinema could learn a lot from Balraj Sahni’s techniques. Balraj combined both the Brechtian and the Stanislavakian methods of acting.His acting revealed great depths of sensitivity and emotion but also contained powerful elements of being detached from the actual character.No actor ever in the history of Bolywood could exhibit the oppression of the common man with such skill and natural acting style.Balraj Sahni is simply an icon for Marxist cultural workers.He literally wrote the character which he played.His art contained more realism than any Indian actor enacting the oppressed common man.Today although a flourishing industry Bolywood is selling itself to the imperialist culture and represents the lackeys of the Ruling classes and imperialists .Major stars basically represent the capitalist classes and imperialist culture.. It is significant that in this very day and age section still idolize his work and see it’s significance.Several critiques rate Balraj Sahni,amongst the 3 finest Indian Bolywood actors of all time.This is a tribute to the ideology of Marxism.-Leninism.Communist revolutionary ranks of today appreciate the work ofSahni.The late revolutionary playwright,Gursharan Singh compiled a series of works of Balraj Sahni and launched the Balraj Sahni Prakashan.Marxist-Leninist-Maoist ranks could imbibe many a lesson from Sahni’s even if he did not publicly uphold Maoism.Let us remember this legend like a spark lighting in our hearts .It is of significance that even the bourgeois media and writers acclaim ‘Do Bhiga Zameen ‘ amongst the 5 best Bolywood films of all time.(I am sure even Marx,Lenin and Mao would have greatly admired it) We should re-incarnate ‘Do Bhiga Zameen’,in the context of the modern era of globalization,with the onslaught of the S.E.Z’s .This new version would have to place more emphasis on the imperialist onslaught.
‘फ्रंटियर’ से साभार