Capitalists, Technocrats and Fanatics: The Ascent of a New Power Bloc by James Petras 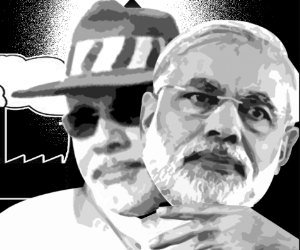 Introduction: The sweeping electoral victory of the Bharatiya Janata Party (BJP) in India is the latest expression of the world-wide advance of a new power bloc which promises to impose a New World Order harnessing ethno-religious fanaticism and narrowly trained technocrats to capitalist absolutism.

The far-right is no longer at the margins of western political discourse. It is center-stage. It is no longer dependent on contributions by local militants; it receives financing from the biggest global corporations. It is no longer dismissed by the mass media. It receives feature coverage, highlighting its ‘dynamic and transformative’ leadership.

Today capitalists everywhere confront great uncertainty, as markets crash and endemic corruption at the highest levels erode competitive markets. Throughout the world, large majorities of the labor force question, challenge and resist the massive transfers of public wealth to an ever reduced oligarchy. Electoral politics no longer define the context for political opposition.

Capitalism, neither in theory nor practice, advances through reason and prosperity. It relies on executive fiats, media manipulation and arbitrary police state intrusions. It increasingly relies on death squads dubbed “Special Forces” and a ‘reserve army’ of para-military fanatics.

The new power bloc is the merger of big business, the wealthy professional classes, upwardly mobile, elite trained technocrats and cadres of ethno-religious fanatics who mobilize the masses.

Today capitalism depends on two seemingly disparate forces. The irrational appeal of ethno-religious supremacists and narrowly trained elite technocrats to advance the rule of capital. Ethno-religious fanatics seek to promote bonds between the corporate-warlord elite and the masses, by appealing to their ‘common’ religious ethnic identities.

The technocrats serve the elite by developing the information systems, formulating the images and messages deceiving and manipulating the masses and designing their economic programs.

The political leaders meet with the corporate elite and warlords to set the political-economic agenda, deciding when to rely on the technocrats and when to moderate or unleash the ethno-religious fanatics.

Imperialism operates via the marriage of science and ethno-religious fanaticism- and both are harnessed to capitalist domination and exploitation.

The election of Narendra Modi, leader of the BJP and long-time member of the Hindu fascist Rashtriya Swayamsevak Sangh (RSS) para-military organization was based on three essential components:

(1) Multi-billion rupee funding from corporate India at home and abroad.

(3) Hundreds of thousands of RSS activists spreading the “Hindutva” racist doctrine among millions of villagers.

The Modi regime promises his capitalist backers that he will “open India”– namely end the land reserves of the tribes, convert farmland to industrial parks, deregulate labor and environmental controls.

To the Brahmin elite he promises to end compensatory quotas for lower castes, the untouchables, the minorities and Muslims. For the Hindu fascists he promises more temples. For foreign capitalists he promises entry into all formerly protected economic sectors. For the US, Modi promises closer working relations against China, Russia and Iran… The BJP’s ethno-religious Hindu fanaticism resonates with Israel’s notion of a “pure”Jewish state. Modi and Netanyahu have longstanding ties and promise close working relations based on similar ethno-racist doctrines.

Turkey: The Transition to Islamic-Capitalist Authoritarianism

Turkey under the rule of Erdogan’s Justice and Development Party has moved decisively toward one-man rule: linking Islam to big capital and police state repression. Erdogan’s ‘triple alliance’ is intent on unleashing mega-capitalist projects, based on the privatization of public spaces and the dispossession of popular neighborhoods. He opened the door to unregulated privatization of mines, communications, banks – leading to exponential growth of profits and the decline of employment security and a rising toll of worker deaths. Erdogan has shed the mask of ‘moderate Islam’ and embraced the jihadist mercenaries invading Syria and legislation expanding religious prerogatives in secular life. Erdogan has launched massive purges of journalists, public officials, civil servants, judges and military officers. He has replaced them with ‘party loyalists’; Erdogan fanatics!

Erdogan has recruited a small army of technocrats who design his mega projects and provide the political infrastructure and programs for his electoral campaigns. Technocrats provide a development agenda that accommodates the foreign and domestic crony corporate elite.

The Anatolian Islamists, small and medium provincial business elite, form the mass base – mobilizing voters, by appealing to chauvinist and ethnocentric beliefs. Erdogan’s repressive, Islamist, capitalist regime’s embrace of the “free market” has been sharply challenged especially in light of the worst mining massacre in Turkish history: the killing of over 300 miners due to corporate negligence and regime complicity. Class polarization threatens the advance of Turkish fascism.

Israel and the “Jewish State”: Billionaires , Ethno-Religious Fanatics and Technocrats

Israel, according to its influential promoters in the US, is a ‘model democracy’. The public pronouncements and the actions of its leaders thoroughly refute that notion. The driving force of Israeli politics is the idea of dispossessing and expelling all Palestinians and converting Israel into a ‘pure’ Jewish state. For decades Israel, funded and colonized by the diaspora, have violently seized Palestinian lands, dispossessed millions and are in the process of Judaizing what remains of the remnant in the “Occupied Territories”.

The Israeli economy is dominated by billionaires. Its “society” is permeated by a highly militarized state. Its highly educated technocrats serve the military-industrial and ethno-religious elite. Big business shares power with both.

Empire building is a dirty business. And while the political leaders directing it, feign respectability and are adept at rolling out the moral platitudes and high purposes, the ‘combatants’ they employ are a most unsavory lot of armed thugs, journalistic verbal assassins and highly respected international jurists who prey on victims and exonerate imperial criminals.

In recent years Euro-American warlords have employed “the scum of the slaughterhouse” to destroy political adversaries in Libya, Syria and the Ukraine.

In Libya lacking any semblance of a respectable middle-class democratic proxy, the Euro-American empire builders armed and financed murderous tribal bands, notorious jihadist terrorists, contrabandist groups, arms and drug smugglers. The Euro-Americans counted on a pocketful of educated stooges holed up in London to subdue the thugs, privatize Libya’s oil fields and convert the country into a recruiting ground and launch pad for exporting armed mercenaries for other imperial missions.

The Libyan riff-raff were not satisfied with a paycheck and facile dismissal: they murdered their US paymaster, chased the technocrats back to Europe and set-up rival fiefdoms. Gadhafi was murdered, but so went Libya as a modern viable state. The arranged marriage of Euro-American empire builders, western educated technocrats and the armed riff-raff was never consummated. In the end the entire imperial venture ended up as a petty squabble in the American Congress over who was responsible for the murder of the US Ambassador in Benghazi.

The Euro-American-Saudi proxy war against Syria follows the Libyan script. Thousands of Islamic fundamentalists are financed, armed, trained and transported from bases in Turkey, Jordan, Saudi Arabia, Iraq and Libya to violently overthrow the Bashar Assad government in Syria. The world’s most retrograde fundamentalists travel to the Euro-American training bases in Jordan and Turkey and then proceed to invade Syria, seizing towns, executing thousands of alleged ‘regime loyalists’ and planting car bombs in densely populated city centers.

The fundamentalist influx soon overwhelmed the London based liberals and their armed groups.

The jihadist terrorists fragmented into warring groups fighting over the Syrian oil fields. Hundreds were killed and thousands fled to Government controlled regions. Euro-US strategists, having lost their original liberal mercenaries, turned toward one or another fundamentalist groups. No longer in control of the ‘politics’ of the terrorists, Euro-US strategists sought to inflect the maximum destruction on Syrian society. Rejecting a negotiated settlement, the Euro-US strategists turned their backs on the internal political opposition challenging Assad via presidential elections.

In the Ukraine, the Euro-Americans backed a junta of servile neo-liberal technocrats, oligarchical kleptocrats and neo-Nazis, dubbed Svoboda and the Right Sector. The latter were the “shock troops” to overthrow the elected government, massacre the federalist democrats in Odessa and the eastern Ukraine, and back the junta appointed oligarchs serving as “governors”.

The entire western mass media white-washed the savage assaults carried out by the neo-Nazis in propping up the Kiev junta. The powerful presence of the neo-fascists in key ministries, their strategic role as front line fighters attacking eastern cities controlled by pro-democracy militants, establishes them as central actors in converting the Ukraine into a military outpost of NATO. Euro-America Empire Building and the Role of Riff-Raff

Everywhere the Euro-American imperialists choose to expand – they rely on the ‘scum of the earth’: tribal gangs in Libya, fundamentalist terrorists in Syria, neo-Nazis in the Ukraine.

Is it by choice or necessity? Clearly few consequential democrats would lend themselves to the predatory and destructive assaults on existing regimes which Euro-US strategists design. In the course of imperial wars, the local producers, workers, ordinary citizens would “self-destroy”, whatever the outcome. Hence the empire builders look toward ‘marginal groups’, those with no stake in society or economy. Those alienated from any primary or secondary groups. Footloose fundamentalists fit that bill – provided they are paid, armed and allowed to carry their own ideological baggage. Neo-Nazis hostile to democracy have no qualms about serving empire builders who share their ideological hostility to democrats, socialists, federalists and culturally ‘diverse’ societies and states. So they are targeted for recruitment by the empire builders.

The riff-raff consider themselves ‘strategic allies’ of the Euro-American empire builders. The latter, however, have no strategic allies – only strategic interests. Their tactical alliances with the riff-raff endure until they secure control over the state and eliminate their adversaries. Then the imperialist seek to demote, co-opt, marginalize or eliminate their ‘inconvenient’ riff-raff allies. The falling out comes about when the fundamentalists and neo-Nazis seek to restrict capital, especially foreign capital and impose restrictions on imperial control over resources and territory. At first the empire builders seek ‘opportunists’ among the riff-raff, those willing to sacrifice their ‘ideals’ for money and office. Those who refuse are relegated to secondary positions distant from strategic decision-making or to remote outposts. Those who resist are assassinated or jailed. The disposal of the riff-raff serves the empire on two counts. It provides the client regime with a fig leaf of respectability and disarms western critics targeting the extremist component of the junta.

The riff-raff, however, with arms, fighting experience and financing, in the course of struggle, gains confidence in its own power. They do not easily submit to Euro-US strategies. They also have ‘strategic plans’ of their own, in which they seek political power to further their ideological agenda and enrich their followers.

The riff-raff, want to ‘transition’ from shock troops of empire into rulers in their own right. Hence the assaults on the US embassy in Libya, the assassination of Euro-American proxies in Syria, Right Sector riots against the Kiev junta.

A new power bloc is emerging on a global scale. It is already flexing its muscles. It has come to power in India, Turkey, Ukraine and Israel. It brings together big business, technocrats and ethno-religious fascists. They promote unrestrained capitalist expansion in association with Euro-American imperialism.

Scientists, economists, and IT specialists design the programs and plans to realize the profits of local and foreign capitalists. The ethno-fascists mobilize the ‘masses’ to attack minorities and class organizations threatening high rates of returns.

The Euro-Americans contribute to this ‘new power bloc’ by promoting their own ‘troika’ made up of ‘neo-liberal clients’, fundamentalists and neo-Nazis to overthrow nationalist adversaries. The advance of imperialism and capitalism in the 21st century is based on the harnessing of the most advanced technology and up-to-date media outlets with the most retrograde political and social leaders and ideologies.
[http://petras.lahaine.org/ से साभार ]