‘The price of a toilet’ by Prashant Pandey 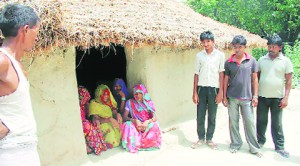 The only Dalit family of a Pratapgarh hamlet moves out after 5-yr-old son has his penis cut off for relieving himself near OBC owner’s flour mill.
The two cousins in Badaun found raped and killed had left home at night to go to the toilet in the open. The five-year-old Dalit boy escaped that fate. But, for relieving himself once too often near the flour mill of an OBC owner, he may end up passing urine from his rectum for the rest of his life.
On June 1, the son of a Pasi brick kiln worker was lured with Rs 50 into a small, dry canal at his Babullapur hamlet under the Korali gram sabha in Pratapgarh district, had pebbles forced into his mouth, and was struck with a brick on his penis till it got severed from the roots.
When the boy returned home crying, father Shesh Ram Saroj first took him to the gram pradhan, who directed him to the police station, barely a kilometre away. From there, the boy was taken to a community health centre, which told Shesh Ram to rush him to the district hospital. There, the boy was referred to the Swaroop Rani Nehru Hospital in Allahabad. The doctors operated upon him and provided for passage of urine through his rectum.
“Doctors told me there is no possibility of grafting the penis back. It is now part of evidence,” says Shesh Ram. It will take nearly two months for his son to heal.
The incident happened in the afternoon as he was preparing food, the father recalls. “My wife had delivered a girl two days earlier. My son insisted on going to play in the mango orchard. Around half an hour later, he returned with blood oozing from his private parts. He told me that chakkiwale (the mill person) had done it.”
The accused, Ambarish Maurya, in his mid-20s, has been arrested. The grandson of the flour mill and mango orchard owner Shiv Asre Maurya, Ambarish guarded trees at the site for money.
The flour mill, the orchard and the canal where the boy was attacked are just 100 metres from Shesh Ram’s mud hut. His is the only Dalit house in Babullapur, the rest all belonging to Mauryas. He moved here on account of lack of space at their joint family home in Korali village.
“My father’s share of two bighas had been distributed into seven parts as we are seven brothers. So there was little space. We asked Shesh to build a house on land belonging to us in Babullapur,” says elder brother Ram Prasad Saroj.
Shesh Ram built his hut more than five years ago, around the time the five-year-old, his eldest, was born. It is a two-room structure with a small courtyard, a thatched roof and no toilet. Shesh Ram and his wife have three other children.
Right from the time they settled in Babullapur, Shesh Ram says, he felt tension between him and the Mauryas. “Fearing trouble, we left some part of our land close to theirs. But they encroached and built their boundary right next to our house,” he says.
Ram Prasad claims the Mauryas tried to set Shesh Ram’s hut on fire once, and that a year ago, he was accused of stealing their gun.
Gram pradhan Kailash Bhadauria confirms the theft charge and that “there may have been other issues”. “But it had not come to my notice,” he claims.
The five-year-old’s mother Sunita Devi says the Mauryas often confronted them about building their house near the mill. At other times, they accused her son and his siblings of venturing into their area and urinating. Says Sunita: “Ab bachchon ko har samay hum kaise rok sakat hai? Aur oo log bhi to bahare jaate hain (How can I stop the children all the time? And they too go out in the open to relieve themselves).”
Mill owner Shiv Asre Maurya denies any hand in what happened. “There was a wedding at the house, of my other grandson, Ambesh, on May 30. On June 1, there was a reception. All of us were at home,” he says. He also denies harassing Shesh Ram’s family.
Inspector R K Singh Chandel, the in-charge of Nawabganj police station, rejects Maurya’s claim. “There was a wedding, but the accused told us during initial interrogation that he was angry with the boy’s habit of relieving himself in the precincts of the mill. We have recovered the Rs 50 note and the blood-stained brick. Also, there is no reason to disbelieve the 5-year-old boy,” says Chandel.
Apart from charges of attempt to murder and causing grievous injury, Ambarish has been booked under the SC/ST (Prevention of Atrocities) Act.
With money pooled from his brothers and relatives, Shesh Ram managed treatment for his son. On days that his family couldn’t get him food to the hospital 80 km away in Allahabad, he didn’t eat anything. “I didn’t have the money to buy food from outside,” Shesh Ram says.
On June 2, the family moved back to Korali, to the same cramped space they left five years ago. Sunita indicates there may be no going back. “If this is what they have done to my son, they can do similar things to my other children and me,” she says.
[http://indianexpress.com/ से साभार]